Have the rules of travel and tourism marketing been re-written with the emergence of Facebook, Twitter et al? Or are we simply playing the same game with a different set of tools at our disposal?

We’ve all heard quotes like ‘social media is a game changer’ or ‘you’ve lost control of your brand’ from the new crop of social media experts that have sprung up due to the rapid adoption of services such as Twitter and Facebook.  But have the rules of marketing really been re-written? For me, the answer is ‘no’.

A very clever chap called Marcus Codrington-Fernandez, a man who has worked on brands such as IBM, Mercedes and Orange (and has now invented a cricket bat) explained to many years before the social media revolution that a brand was communicated by a series of conversations. Some of these conversations the brand would be directly involved with and some not (see fig 1 below). A large part of the marketer’s brief was to get the right sort of conversations going about their brand. 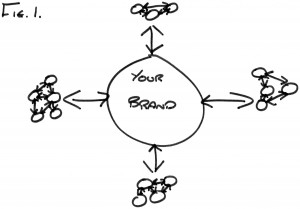 So brands have always been about conversations, and people were having conversations long before social media came along. So what has social media changed?  Well I’m not sure ‘change’ is the right word. ‘Amplied’ and/or ‘Multiplied’ would be more appropriate.

What it has done is engendered new social connections, multiplied the level of conversation, increased the speed of diffusion of those conversations and made them much more visible (see fig 2 below). 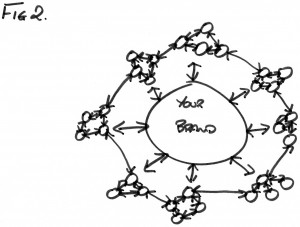 To give you can example close to home, my wife is an avid ‘Facebooker’ and I dabble with Twitter. We’ve have both made new social connections as a result of these services with people we may not have been in contact with otherwise. For my wife, its old friends and colleagues she’d lost touch with and for me its people who share a professional interest.

And there’s no doubt that the number of conversations we have has increased. Both of us now have conversations with new and existing contacts that simply wouldn’t have happened before. You post something about your day you think your friends might be interested in, and ‘hey presto’ they respond. But we still email, we still skype, we still text and, heaven forbid, we still occasionally talk to people face to face.

Of course we’ve all heard the ‘wildfire’ effect of social media. The Jan Moir/Stephen Gately furore was whipped up on Twitter and most people who complained about the Jonathan Ross/Russel Brand incident never ever heard it live. But ‘old’ media could spread good and bad news – the Mail in the case of JR/RB – it’s just speeded things up and allowed us to more readily connect directly with the people in the heart of the firestorm.

And social media conversations, especially on Twitter, are much more visible than they were before – Google can’t index personal emails and IM like it can Twitter for eg. As a travel company, you can use twitter search to find someone looking for honeymoon ideas and make some useful suggestions. Or find someone moaning about your service and nip the problem in the bud.  But then again, you could find someone complaining about your service on TripAdvisor – it just that social media makes it easier to identify and connect.

As individuals. social media enables us to do things that we’ve always done and always wanted to do – have conversations with people we share an affinity with. It’s just made it a darn site easier and therefore encouraged us to do it more often. When push comes to shove, it’s people using these things, and people’s motivations are the same as they’ve always been.

So the game hasn’t changed – engender the right sort of conversations about your brand – you’ve just got a few new tools in your locker which means you need to re-think your tactics.  But don’t throw out the old rulebook.

And the de rigueur phrase that irritates me most of all – ‘you’ve lost control of your brand’. Rubbish.  You haven’t suddenly lost control of your brand because you never had complete control of it in the first place. Conversations were always taking place about your brand that you never had complete control over. But by focusing on delivering a customer experience consistent with your vision and values, you could influence those conversations in the same way you can influence the new conversations happening as a result of Facebook, Twitter et al.