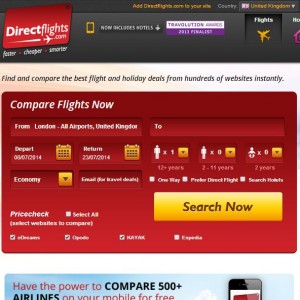 Flight, hotel and holiday comparison site DirectFlight’s marketing strategy was focused around search. But with search getting ever more competitive and expensive, the people running the business wondered whether Facebook could be an alternative source of new (and more cheaply acquired) customers. One thing was for sure – there weren’t going to be able to test this theory with their existing audience of 600-ish Facebook followers. They needed to grow that following quickly and cheaply, and recruit the sort of people that would love the service they offered. That’s why we devised ‘Likes for Flights’ competition.

But how do you make the competition reach beyond your followers? You give them not one, but two incentives to share that competition with as many of their friends as possible.

For each new like the DirectFlights page received, the winner could fly one return airmile. So if we got 3,403 new likes, they could fly to Dubai and for 5,369 new likes they could fly to San Francisco. That was one incentive to share – the more friends they shared the competition with, the further they could potentially fly. But there was a second incentive too – each share also got them an additional entry into the prize draw.

We kept interest up via an interactive map which keep people updated as to how far they could fly if they won, and regular posts on ‘upcoming’ destinations to encourage people to let more of their friends know so they could fly further.