Two recent developments have suggested ways to more than double the effectiveness of online advertising – a combination of ad content, frequency and placement.

It seems a little premature to be blogging on the subject of online advertising again but there have been a couple of developments in the past week that have compelled me to put ‘fingers to keyboard’.

The report covers how online creative, environment and frequency can optimise the effectiveness of online travel advertising.

The biggest win, if you haven’t actioned it already, is to replace your old fashioned banner ads with interactive or rich media ones. From Eyeblaster’s study of the airline industry, this change was found to increase click thrus by a factor of 2.7 and to double conversions. This makes sense – not only are rich media ads more prominent, they’re also by their very nature more interactive and, if you’re clever, more dynamic and therefore more likely to be relevant.

Eyeblaster also investigated the optimum frequency. The figure they arrived at was 4 – that is 4 impressions per target user was the optimum to maximise click thrus. The conclusion was that even the airline industry was significantly under-investing in online advertising as 82% of campaigns served users 3 or fewer. 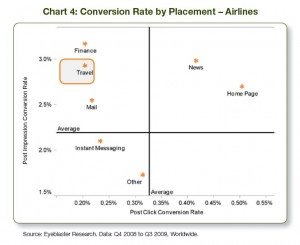 The really interesting stat however was to do with environment. Most travel companies would opt for ‘travel’ sites and/or travel sections in other more general sites as the optimum place to serve their online ads. Eyeblaster’s study found that travel sites were not the best environments for either direct response or branding.

For branding campaigns, Eyeblaster used Dwell Rate (proportion of users who see an ad who interact with it in some way) and Average Dwell Time (the average length of that interaction) as the key metrics for success. In this case, travel performed well for Dwell Rate but poorly for Average Dwell Time, again most likely to do with competition from other advertisers. News, lifestyle and finance sites were the best performing overall, with finances sites warranting an mention as a particularly good place to engage a more upmarket user. 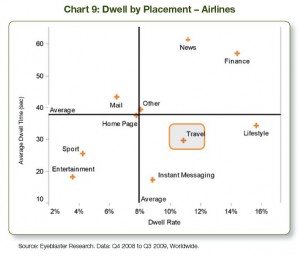 So these results are suggesting that you should be looking beyond pure travel sites to news, finance and lifestyle sites which can yield more fruitful results dependent upon your objective.  However, I certainly wouldn’t rule out travel sites’, it’s just that in this environment you’re going to have to work harder to stand out.  That could be by using rich media, including video, it could mean by ad synching (running 2 related creatives on the same page) or it could be by making the ad content dynamic and personalising it to the user.

And it’s on this latter topic that I move on to the 2nd development – the launch of the personalised ad service by Google. Now totally personalised ads are not new – as you know I blogged about Struq only a few weeks ago. But the launch by Google of this service means that it has moved into the mainstream.

So how does it work? Well, in the same way that Struq does in that visitors to an advertiser’s site will be receive an ad with content bespoke to their actions on that site when they visit any part of the Google content network.  Hence, if a user visits your site, searches and clicks on a holiday and doesn’t go on to book, you can serve an ad to that user when they’re on a Google content network site (which includes YouTube) which offers a discount on the very same holiday they’ve been looking for.  Clever stuff.

It’s by doing clever things like this that services such as Struq have claimed better CPAs than search. And the reach of the Google Content Network, over 1m sites in total, makes this launch even more exciting and significant.

The one caveat is consumer reaction to behavioural targeting. Services such as Phorm have run into difficulties in the UK over privacy concerns.  Cookies are ‘anonymous’ but the launch of services like these not only make personalised advertising mainstream for advertisers, but more visible to users to.  I think it’s unlikely but a backlash could result.

http://www.navigator-marketing.co.uk/wp-content/uploads/Navigator-Marketing-Homepage_4.jpg 0 0 Ben Blackler http://www.navigator-marketing.co.uk/wp-content/uploads/Navigator-Marketing-Homepage_4.jpg Ben Blackler2012-07-12 15:44:382014-04-07 10:15:02Want to more than Double the Effectiveness of Your Online Advertising? - Here's How